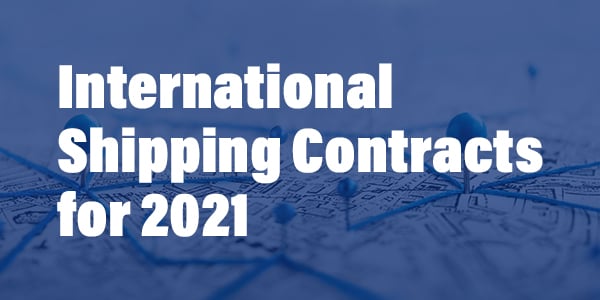 Now that we’re well into 2022, it’s becoming apparent that it is a great time for carriers—but not so much for shippers. Here’s why.

Record rates are plaguing the industry. Container shipping rates spiked again in May, with Asia to West Coast rates rising 3.2 times higher than in 2020. Shippers now pay $3,000-$5,000 more per box in premium charges, on top of base rates to get cargo loaded.

Plummeting carrier reliability also plays a factor. In January, carriers reported the lowest reliability rates in years, hovering around 22% on the East Coast and 13% on the West Coast. The situation continues to persist, though signs since March have pointed to a potential increase in reliability moving forward.

After creating chaos for European and U.S. East Coast trade, the Suez Canal incident also had an impact. Though short-lived, the incident delayed container returns to Asia, in a market already reeling from a shortage.

After a year of soaring container rates and plunging availability, shippers are now seeking the right strategy to approach long-term contract negotiations. Some are opting for early deals. Others are taking a wait-and-see approach to see if spot rates cool off, leaving them in a better position to negotiate.

Normally, by midyear, shippers and carriers have inked contracts locking in rates and weekly space allocations. That’s no longer the case. Soaring spot rates make carriers reluctant to lock in long-term contracts. If the market’s paying $8,000 from Shanghai to the West Coast, why would a carrier lock in a deal for $3,000?

Carriers instead take a short-term perspective. Capacity is so tight that even if shippers get a carrier to agree to a lower rate, they may still struggle to move their cargo. The cargo of shippers paying more will move first.

Are Long-Term Contracts Out of the Question?

Most carriers are unwilling to commit to rate/volume deals. Rates with even 60-day validity are hard to secure, and only those shippers with vast cargo volumes get decent deals. Everyone else fights for space.

Shippers report difficulty securing long-term contracts, with most long-term deals entering their second or third round of negotiations. Carriers refuse to commit to volumes based on grade levels. Usually, by midyear, shippers agree to move a set number of containers with a carrier, and the carrier returns with a long-term deal.

Now, carriers only lock in long-term deals at peak prices. The shipper gets the space but at the highest possible cost. Premium services and prices move cargo.

The container shortage also impacts long-term contracts. It’s difficult to guarantee cargo movement without containers to fill. And carriers would rather return empties than fill containers with goods. FAK rates from the West Coast to Asia are upward of $9,000. Carriers charge $300 to get a box back and refill it. It’s more lucrative to ship it empty.

Securing optimal rates in cargo contracts requires effort on the shippers’ part. Carriers must know how much they plan to ship, how often they plan to ship, the tonnage, and what they currently pay. They must also provide proof of payment that shows how quickly they pay their bills.

Forecasts that calculate a shipper’s booking patterns for six months or longer can aid negotiations. It helps to say, “I will have five shipments from Shanghai to Chicago next month; 10 from Shanghai to Dallas the following month; and so on.” Knowing this information does not guarantee space, but it helps freight forwarders negotiate for space well in advance. Dealing with 500 containers versus 50 changes the conversation.

Double-check the terms and conditions of shipping contracts. Most rates are subject to change. For instance, carriers now include peak season surcharges (PSS) in every contract without a cap. A contract with a long-term rate of $3,000 to ship from Shanghai to Los Angeles also includes PSS without a cap. In June, when rates move to $5,000, the contract requires shippers to pay PSS that pushes the rate to $5,000.

Check the free time listed in the contract. Many carriers are tough on free time and limit container returns to 10-15 days. It’s crucial that shippers fine-tune their supply chains to meet tighter return schedules, or they may rack up thousands in detention and demurrage fees.

Should You Use a Freight Forwarder for Your International Shipping Capacity?

A freight forwarder will arrange cargo movement from one country to the other. Their inside knowledge of the industry climate and relationships with carriers will save time, improve efficiency, and secure the best rates in today’s volatile shipping environment.

As soon as we think we’ve reached peak rates, the rates skyrocket again. Having flexibility and planned options helps shippers maintain stability as the market remains in chaos. Everyone is in the same boat, so make transparency No. 1. And remember, if rates seem too good to be true, they probably are!