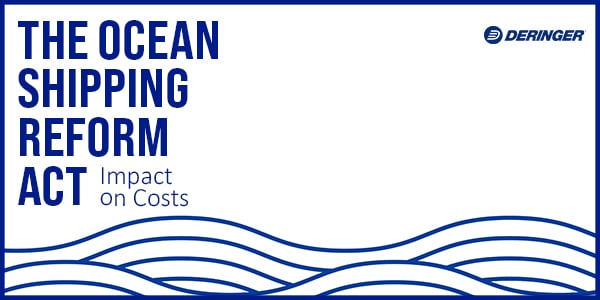 OSRA gives the Federal Maritime Commission (FMC) more power to deal with U.S. supply chain disruptions. This is good news for shippers who had trouble importing into the U.S. in 2021 as record throughput and port congestion made waves.

The Federal government reports the bill “revises requirements governing ocean shipping” and increases the FMC’s authority to “promote the growth and development of U.S. exports through an ocean transportation system that is competitive, efficient, and economical.”

Shippers may experience some relief as the FMC intervenes to:

The legislation also prohibits ocean carriers, marine terminal operators, and ocean transportation intermediaries from unreasonably refusing cargo space when space is available and resorting to other unfair and discriminatory practices.

The globe saw a major supply chain delay in March 2020 during COVID-19 shutdowns. But once countries reopened, supply chains started operating at a rapid clip.

This has led to a shortage of vessel space, containers, and equipment; port congestion; service delays and escalating rates; and delayed shipments at their origin.

Ships now wait two to three weeks to unload while shippers pay carriers premium rates for their services, up to 10 times as high as in 2019. Delays and terminal congestion also jacked up detention and demurrage, and as that happened, carriers began seeing detention and demurrage as a major revenue stream. Carriers increased these charges by 104% from 2020 to 2021 at the world’s 20 largest ports. And shippers paid $43.03 million in demurrage fees at the Ports of Los Angeles and Long Beach alone.

Rate increases also rule the day. Carriers have increased their rates by 250% to the West Coast and 170% to the East Coast and started charging port congestion fees.

A global recession stands to change all this. Consumer demand is faltering, and oversupply is returning as high energy, fuel prices, and inflation impact shipping. While rates have fallen slightly, carriers are not dropping them as fast as one would expect. Carriers don't make money if their ships are only half full.

Shippers have complained to lawmakers about these challenges. Congress passed OSRA to address the many complaints its leaders received.

What is the Ocean Shipping Reform Act (OSRA)?

This legislation aims to level the playing field for importers and exporters by allowing the FMC to crack down on carriers charging exorbitant fees for international ocean shipping.

The new standards will limit carriers’ ability to charge unreasonable detention and demurrage charges as goods sit on ships or in port terminals through no fault of the shippers.

How will OSRA be Enforced?

The Shipping Act, last amended in 1998, designated the FMC to protect the interests of U.S. businesses relying on ocean transport. The new law adds to this role by giving the FMC tools to eliminate unfair charges, prevent unreasonable denials of American exports, and crack down on other unfair practices that harm American businesses and consumers.

But added enforcement comes with challenges. There is currently one investigator for every $1 trillion of commerce the FMC is expected to oversee. In the Fiscal Year (FY) 2021, a lack of funding made it impossible for the FMC to reach its desired staffing level of 128 permanent full-time positions.

OSRA has earmarked approximately $32.9 million for FY 2022 and plans to increase FMC’s budget to $49.2 million by FY 2025 to address these concerns.

Limited staffing or not, the first OSRA case has already come to fruition. A furniture company out of Indiana seeks to have more than $100,000 in detention charges voided because the invoices provided by a non-vessel-operating common carrier (NVOCC) did not include the data elements now required by OSRA.

The case hasn't been decided yet. But it’s clear that ensuring all data elements appear on invoices will represent a big piece of the enforcement puzzle. The shipping community is being listened to as things move forward. But uncertainty and gray areas remain.

How Does OSRA Benefit/Impact Shippers?

If FMC enforces everything as it should, shippers will see increased visibility across their supply chains. Currently, most shippers can see a vessel moving across the ocean, but once cargo arrives in port, their visibility ends, and they must wait for updates.

Carriers must update their systems to communicate better with shippers once goods get to port. Improved technology will keep carriers honest and goods moving, driving down port congestion.

OSRA seems to move shipping in the right direction, but many shippers lack faith in the FMC’s ability and willingness to enforce measures against carriers. Past experience has shown FMC enforcement to be lacking. And the FMC, which oversees every mode of transportation, not just ocean, has acknowledged that its limited budget and labor challenges have hindered regulation in the past.

Still, the law compels and requires the FMC to issue more concrete rules on topics like detention and demurrage fees. However, a lack of competition among carriers could limit what these rules can accomplish in reduced rates and fees.

Everyone needs to wait and see how effective the FMC will be with its increased budget. But for now, all agree that OSRA, the first major regulatory update since 1998, is a step in the right direction.

Plan for the Future

OSRA empowers the FMC to change unfair carrier practices. The law provides the FMC with more funding to hire professionals to develop specific guidelines and rules and carry out enforcement actions.

But whether OSRA is enough to repair disrupted supply chains in 2023 remains to be seen. For now, shippers should plan for higher rates and excessive detention and demurrage fees until the FMC can calm the seas of recent disruptions.