The Past, the Present & the Future of Tariffs

Back in July, Deringer's Director of Sales and Marketing, Jack Bender, wrote an article for SupplyChainBrain explaining the potential impacts of the tariffs that were recently put in place by the Trump Administration.  As 2019 quickly approaches, let's take a look back and see which predictions of Jack's have come to pass and which ones appear to be taking effect in the near future.

It is important to note that the landscape of international trade is constantly evolving, so be sure your compliance program is solid to ensure you are fully prepared for the changing import and export duties.

"The White House imposed a bundle of tariffs on China, with plans to impose more, affecting billions of dollars’ worth of goods — with a threat to levy other tariffs that could impact an additional $200B or more in products." 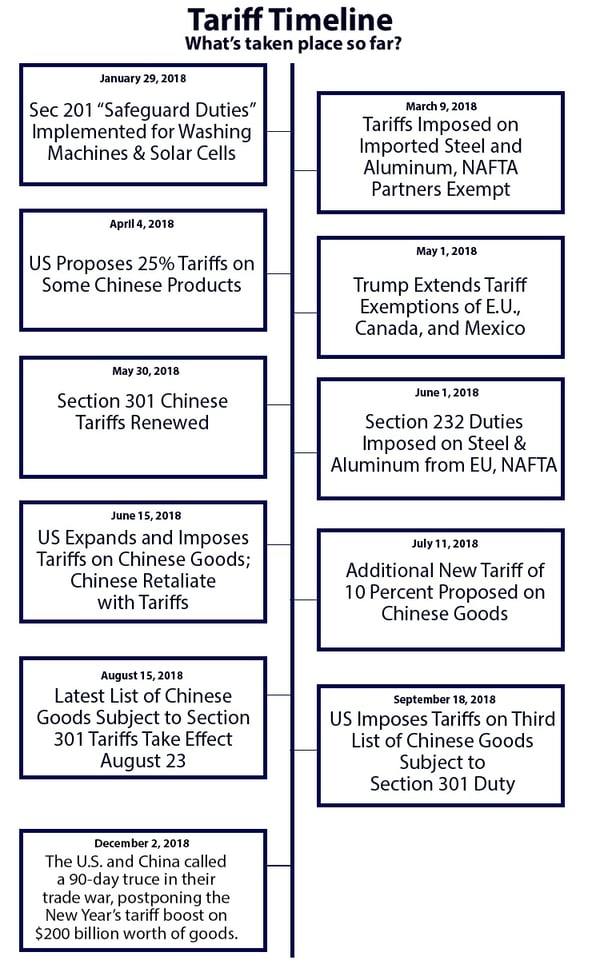 Looking into the Crystal Ball?

"Because of steel and aluminum tariffs, American automakers that manufacture in Mexico and Canada will likely see their production costs rise — meanwhile a tariff on car imports from other countries is still on the table."

With the signing of the USMCA, there could be changes to how the U.S. will handle steel and aluminum tariffs within the automotive industry, specifically with imports from Mexico and Canada. For example, GM announced the closure of seven factories globally in response to poor sales and the "seeming permanence" of Trump's trade policies.

As for vehicle imports, it appears as though car prices will rise due to  imported  parts coming from various countries, even if the automobiles themselves are put-together on U.S. soil. The amount that the prices will increase has not yet been determined, as these matters are being worked upon daily.

"U.S. consumers at all economic levels will pay higher prices for many products — far beyond just automobiles and electronics, thus fueling inflation."

According to Business Insider, there will be some inflation due to the tariffs imposed. Most of this will affect the low-income U.S. households, as they tend to spend more on inexpensive Chinese imports. However, a study conducted by American Shipper has found that these tariffs may hurt China even more than the U.S.

"By withdrawing from the TPP [Trans-Pacific Partnership], it appears that Trump’s strategy is an attempt to divide and conquer. The prevailing preference within the Administration now seems to be that the U.S negotiates bilateral trade agreements with individual countries, in the belief that better “deals” are available — one-on-one."

The U.S. has been in talks with various nations since leaving the TPP. The USTR has been in discussion about a U.S. - Japan Trade Agreement that will continue to build a"strong and mutually beneficial trade relationship," according to American Shipper. The Korean Free Trade Agreement (KORUS) has also been modified recently,  to continue to maintain strong trade between the two countries.   A full list of Trade Agreements can be found here.

Stay Up-To-Date with the latest on tariffs, imports, and more!

What steps are businesses taking to the emerging trade war environment?

"Many manufacturers already have been moving production out of China or adding new production locations — such as Vietnam, Indonesia, India, the Middle East and elsewhere — to augment or replace their China operations."

Companies such as Mitsubishi Electric, Toshiba Machine Co., and Komatsu are moving production out of China due to the trade war. There are multiple other companies that are proposing a move from China if the trade war continues or deepens. Until the U.S. and China can come to an agreement, it appears as though more businesses will continue to move away from China for goods that they plan to export into the United States.

"The value of time — ...has become ever more important in this world of the 'I want it now' customer. Crossing oceans and far-flung supply chains challenge companies’ ability to be agile in their production and in their service to customers."

One thing that companies must be aware of while deciding whether or not to move portions of their supply chain away from China is the impact that it may have on how quickly their goods can be imported into the U.S. With the looming January 1st deadline for the first round of tariffs, companies have been scrambling to get their goods imported into the United States as quickly as possible.

"In early 2016, the de minimis value of a single shipment was raised from $200 to $800. To capitalize on this higher threshold, some companies — retailers in particular — have opened facilities just across the U.S. border (often in Mexico) to ship goods — typically parcel — in value quantities that are not subject to U.S. Customs duties and taxes."

The trend of opening facilities across the border has continued as we move closer to 2019. Companies are using these facilities to capitalize on the higher de minimis threshold. However, these practices are coming under greater scrutiny from U.S. Customs and Border Protection (CBP). On January 1, 2019, truck shipments with goods under the de minimis value (e.g., Section 321) will be required to file an advance eManifest; previously, these shipments were exempted through CBP policy.

Overall, much has changed in the landscape of tariffs since Jack Bender's article was published in July. Many of his points have come to pass, or are looking as though they will be implemented in the upcoming year. Be sure to check back later, as we will continue to update you with the most relevant information regarding tariffs.