Will Detention and Demurrage Struggles Continue in 2021? 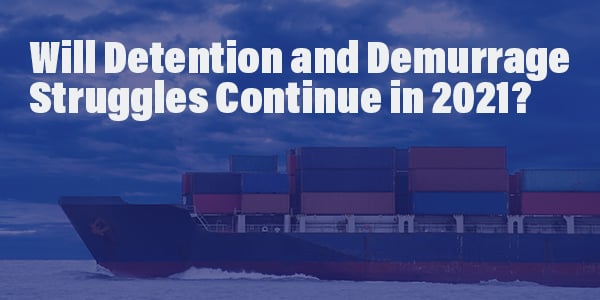 When products sit in port longer than they should, shippers can pay thousands in demurrage and detention fees—even if the problem is not their fault.

That’s exactly what shippers will see in 2021, as many of the nation’s ports struggle to keep pace with record cargo imports, which are up 27% since 2019. These massive delays cost shippers thousands in unnecessary detention and demurrage fees in 2020. Experts predict the trend will continue.

Terminal congestion, container and chassis shortages, excessive wait times for warehouse space, and extended truck and rail turn-times compound the problem. Ports report that supply chains are bursting at the seams along with terminals, trucking companies, and rail systems.

Add carrier reliability issues to the equation, and it’s a real mess. Carrier reliability has plummeted to its lowest point since 2011, falling from 52% to 32% reliability for ships coming from Asia. And even if vessels are on time, congestion often prevents timely unloading.

Ports issue demurrage fines after a container moves from a ship to the terminal and transport does not pick it up within the port’s grace period. Demurrage fees rack-up per container for every working day they sit in port after the grace period ends. Daily demurrage costs range from $75 to $150 per shipping container per day.

Ports and vessels also limit the time for an importer to return containers. This is known as detention. Ports assess detention fees when shippers do not return empty containers after a three-to-five-day grace period. The fines range from $50 to $100 per container per day.

Ports are responding to heightened congestion by limiting free days. Ports offering ten free days may slash that time to six for detention and four for demurrage—a far cry from 20 years ago, when 20 days was the norm.

Larger shippers ask—and often receive—a longer grace period, where the port allows them to keep their containers in the yard. However, increased congestion has caused carriers to stop extending free time to keep containers moving.

Ports are so congested that even extended free time would likely not be enough of a help. In December, 20 ships over 10,000 TEUs waited to unload their cargo outside the Port of Long Beach. The terminal ran out of room for incoming containers. One ship sat for 40 days before unloading its containers onto the rail system.

Though the carrier did not charge shippers for this delay, this is not always the case. Carriers have been known to charge 10 to 15 days demurrage—even when they were at fault.

Delays also bar shippers from returning containers within the grace period, leading to delayed exports. In response, carriers ship empty containers to make money and address container shortages in Europe and Asia. Carriers receive $700 to return empty containers, a far cry from a FAK rate of $4,000 to $6,000. But that $700 is better than having vessels sit in port waiting for full containers.

Container return windows operate by strict timeframes. Some carriers will work with shippers and extend the timeframe by two to three days. Many will not. It’s the shippers’ responsibility to ensure they pull containers and return them on time.

Unprecedented congestion has been pushing ports to double down their efforts to alleviate it.

Ports will also work with shippers when delays run the risk of dampening their profits. In December, Hasbro had containers sitting in a terminal and needed its shipment released for the holiday sales season. The port director successfully teamed up with Hasbro to get the containers moving.

A 3PL can help importers get their shipments picked up and transported to where they need to go—even when port congestion is an issue.

A 3PL can clear cargo in advance and pre-plan delivery options. Once cargo arrives, they will make sure it’s picked up and will appraise you of delays. A 3PL documents any attempts to pick up the cargo and handles all disputes.

A 3PL can also negotiate terms. Sometimes they can even secure free time in port to avoid unnecessary detention and demurrage fees. Carriers may approve the request when there are compelling reasons for it.

A 3PL also knows the rules for every port and every carrier. Knowing port and carrier grace periods and detention and demurrage fees can aid planning efforts. Perhaps the shipper needs to dispatch cargo early to build in a buffer for congestion and tardy transporters. Or maybe they need to develop a Plan B, such as alternative routes or terminals for the transport company if port congestion is a problem.

Planning is everything when it comes to port congestion. A 3PL helps shippers develop a plan that prevents delays, avoids disputes, and saves them money.